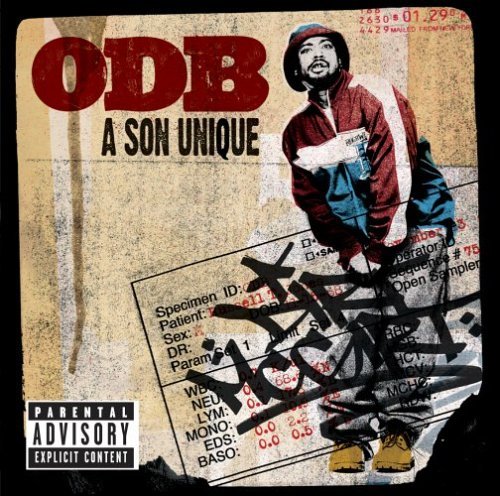 Even though Nigga Please was his last album to officially see the light of day, the Ol’ Dirty Bastard of the almighty Wu-Tang Clan signed with Roc-a-Fella Records right when he got out of prison in 2003 & was able to make 1 more album right before he passed away of an accidental drug overdose the following year. It was supposed to be released in late June of 2005, but it never saw an official release despite it later leaking online.

While I enjoy Dirt’s verse as well as the keys & boom bap drums on the opening track “Lift Ya Skirt”, hearing him with Missy Elliott didn’t really sound all that great to me. The next track is a remix of the DJ Premier produced “Pop Shots” off of Ol’ Dirty’s posthumous Osirus mixtape & it sounds almost exactly the same as the original version with the exception of the 2nd verse being replaced with a new verse from Lil’ Fame of M.O.P. (even though we hear ODB give the very first line from the original 2nd verse before Fame starts spitting) & it’s just as hard as the OG version. The next song “Operator” talks about how fine this girl is & while the production from The Neptunes isn’t as great as “Got Your Money” or even “Pop Shit”, it was kinda cool to hear Dirt with Clipse.

The song “Back in the Air” with fellow Wu member Ghostface Killah is the 1st of 4 songs on the entire album to be produced by the Clan’s de facto leader RZA & while Ghost’s verse is hard, I think Dirt Dog sounds right at home over the Gene Page sample that The Abbott brings to the table. The song “Work for Me” with Young Chris of the State Property subgroup Young Gunz is a club track in every aspect & while Rockwilder’s production on here is fantastic, I don’t think it suits Dirt. The Macy Gray duet “ODB, Don’t Go Breaking My Heart” is a rendition of the Elton John & Kiki Dee duet with the same name & I actually find it to be both jarring & a bit humorous at the same time. “The Stomp, Pt. II” is a sequel to “The Stomp” off of Dirt’s solo debut Return to the 36 Chambers: The Dirty Version & not only will RZA’s production get you into fight mode, but Dirt’s bars are purely flawless!

I don’t have an issue with him talking about having a good time while on probation on the next song “How Ya Feelin’?”, the beat is pretty bland. The song “Intoxicated” with Raekwon & Method Man isn’t a “Raw Hide, Pt. II” or anything like that, but the horns throughout RZA’s production are pretty nice & Dirt’s aggressively delivered verse at the end is just hilarious. The perfectly titled “Dirty & Grimey” is a collaboration with N.O.R.E. of Capone-N-N.O.R.E. & while they don’t sound bad together at all, Dame Grease’s production is just slightly above average & the hook is just awful! The song “Danger Zone” with Joe Budden has a Middle Eastern influenced beat & as much as I respect Joe, I’m not totally sure if his verse was added before or after Ol’ Dirty’s passing. However, Dirt’s yelled-delivery on here is just wild!

The next track “Skrilla” is the final RZA produced track on the album & I’ll go as far to say that this is THE best track on the album. The production’s abrasive & Dirt’s rhyme schemes throughout are just off the wall. Matter of fact, the beat would go on to be re-tweaked & reused on “The Glide” off of Method Man’s highly (no pun intended) slept-on 4th album 4:21…The Day After. The closer “Don’t Hurt Me” has a couple Slick Rick references throughout that aren’t bad, but I seriously think the beat sounds like something I’d hear on a N.O.R.E. album.

All & all, this wasn’t a bad way to end Ol’ Dirty’s solo career at all. Yeah there were WAY too many features than there should’ve been but considering how popular the label was around the time the album was recorded, I think it really would’ve seen quite a bit of success if it was officially released. On that note, Rest In Peace to one of the most erratic & 1 of a kind figures in all of hip hop