Goodie Mob is an Atlanta quartet consisting of Cee-Lo Green, Big Gipp, Khujo & T-Mo. Their 1995 debut Soul Food is easily one of the greatest southern hip hop records ever made & their 1999 sophomore effort Still Standing is really good too, but the 3 albums that’ve followed have been either hit or miss. However after a 7 year hiatus, they’re reuniting with Ortanized Noize for their 6th full-length album.

Things kick off with “Are You Ready?”, where Goodie Mob talks about strengthening the Black community over a rock-flavored beat. The next song “Frontline” talks about anarchy over a rubbery instrumental while the track “Curry Goat” goes at the studio gangstas over a ghostly beat. The song “No Cigar” with André 3000 sees the 4 asking who wants the smoke over bouncy trap instrumental while the track “Prey 4 da Sheep” with Big Boi finds the 4 talking about those lost in the matrix over a laidback beat.

After the “DC Young Fly Crowe’s Nest Break” skit, the song “4 My Ppl” is an empowering tribute to African Americans over a rebellious instrumental with some occasional horns & then after the “Big Rube’s Road Break” skit, the track “Off Road” is a wonderful feel-good anthem that I can imagine being blasted at BBQs next spring/summer.

The penultimate song “Calm B4 da Storm” warns the listener that they haven’t seen nothing yet backed by multiple beat-switches & after the “Big Rube’s Amazing Break”, the closer “Amazing Grays” talks about making your time count over a chilling instrumental.

If you wanna hear a great comeback effort from one of the greatest southern hip hop groups of all-time, I HIGHLY recommend this album because I honestly think it’s their best since Still Standing. Organized Noize provides a fantastic musical backdrop for Goodie Mob as the quartet do a great job at tackling the social issues that we’ve been facing throughout this hectic year.

This is the 8th full-length album from Atlanta rapper, singer & songwriter Future. Lot a people don’t know that he got his start being brought into the Dungeon Family thanks to his cousin Rico Wade of Organized Noize but he did become one of the leading figures in the trap subgenre with releases like Honest, Monster, Beast Mode, 56 Nights & my personal favorite: D.S. 2 (Dirty Sprite 2). It’s been a little over a year since Future’s last album The WIZRD, but he’s now coming out of the shadows with High Off Life.

Things kick off with “Trapped in the Sun”, where Future talks about giving game to his sons over a tense instrumental. The next song “HiTek Tek” of course gets materialistic over a bland instrumental while the track “Touch the Sky” talks about how no one can finesse him over a cavernous Southside beat. The song “Solitaries” with Travis Scott sees the 2 getting boastful over a lively beat from Wheezy & Mike Dean while the track “Ridin’ Strikers” talks about sending shooters & the way that the So Icey Boyz’ instrumental on here transitions during the last minute or so is just jaw-dropping.

The song “One of My” gets annoyingly repetitive over a dime a dozen trap beat while the track “Posted with Demons” talks about pimpin’ over a DJ Spinz beat with some luscious string sections. The song “Hard to Choose One” talks about having too many bitches over a keyboard heavy instrumental while the track “Trillionaire” with YoungBoy Never Broke Again sees the 2 vapidly talking about becoming richer than they already are over a comatose instrumental.

The track “Harlem Shake” with Young Thug sees the 2 talking about being trap stars over an Italian-flavored beat while the song “Up the River” pretty much addresses that he’s the one a lot of trap rappers got their styles from over an euphoric beat. The track “Pray for a Key” gets reflective over a cloudy TM88 beat with some occasional vinyl crackling if you listen very closely while the song “Too Comfortable” is a message to all the hoes that wanna fuck with him over an acoustic trap beat.

The track “All Bad” with Lil Uzi Vert sees the 2 talking about how fine the women around them are over a colorful instrumental while the song “Outer Space Bih” talks about over a DY beat with a piano-loop that’s sweet to the ear. The track “Accepting My Flaws” is a beautiful thank you to Lori Harvey backed by a heavenly instrumental while the song “Life is Good” with Drake is pretty much 2 mediocre solo songs from each artist combined into 1.

The track “Last Name” with Lil Durk sees the 2 talking about paranoia over a dismal beat while the song “Tycoon” talks about being a magnate over a sedating instrumental. The penultimate track “100 Shooters” with Doe Boy & Meek Mill sees the 3 talking about how street their are over a woodwind-infused Tay Keith beat & then the album finishes off with a pointless sequel to “Life is Good” except it’s Future on the first half then DaBaby & Lil Baby on the other.

You know I wasn’t really looking forward to this album given how hit or miss Future’s discography has been since 2017, but this is definitely one of his better releases within the past 3 years. Some tracks during the 70 minutes runtime definitely could’ve been left on the cutting room floor, but the production is a lot more interesting for the most part & the songwriting is a lot catchier too.

Future is a 35 year old rapper, singer & songwriter from Atlanta, Georgia who came up as a member of the Dungeon Family thanks to his cousin Rico Wade of Organized Noize. He officially made his debut in 2012 with Pluto & would later follow it up with a hot streak of modern day trap essentials like Honest, Monster, Beast Mode & my personal favorite of his: D.S. 2 (Dirty Sprite 2). However since 2017, Future has mostly been painting himself in a corner & prioritizing quantity over quality. I mean sure HNDRXX took a more sensual approach & SUPER SLIMEY showed a pretty great chemistry with fellow trap trailblazer Young Thug, but Beast Mode 2 was a step down from the predecessor & he got with Juice WRLD last fall to put out a collab tape that literally should’ve never happened: WRLD on Drugs. Finally at the very beginning of this year, Future’s previous album The WIZRD was just passable even though it showed NO artistic evolution WHATSOEVER. All that being said, I was curious in trying out his debut EP over here that he randomly decided to drop.

The opener “XANAX DAMAGE” is a mindnumbingly repetitive piece about venting to this chick over a trap beat with a depressing acoustic guitar passage while the next track “ST. LUCIA” sounds like it could’ve been on Future’s last album, really. The song “PLEASE TELL ME” is a simp anthem a spacey beat while the track “SHOTGUN” is a horrifically corny ballad with an annoying hook & a buttery instrumental. The song “GOVERNMENT OFFICIAL” talks about the party life over a haunting trap beat & while the penultimate track “EXTRA” has an endearingly depressing tone to it, the producer FXXXXY sounds EXACTLY like Drake on the post-chorus & it’s SCARY. The EP then closes out with “LOVE THY ENEMIES”, where Future vents about his insecurities over an gloomy guitar passage.

I wasn’t expecting much from this & the end result was pretty average. It’s interesting to hear him going into a more emo direction on a few cuts, but the songs don’t sound fully complete to me. If we’re truly getting a HNDRXX 2 at some point, then I hope it’s better than this.

With today being Mother’s Day, former OutKast member André 3000 is coming out of the blue with a 2 track EP. The first track “Me&My(To Bury Your Parents)”, where 3 Stacks sings about memories of being with his mom at a grocery store & driving to a football game with his dad over a somber piano from Kevin Kendrick. The other one is the title track, which is just a beautiful 17 minute free jazz instrumental.

I always thought The Love Below would be the closest thing we’d ever get to an André 3000 solo project, but this EP was a pleasant surprise. I wish it was more than just 2 tracks, but it goes to show that he’s still a very talented singer & producer to this very day 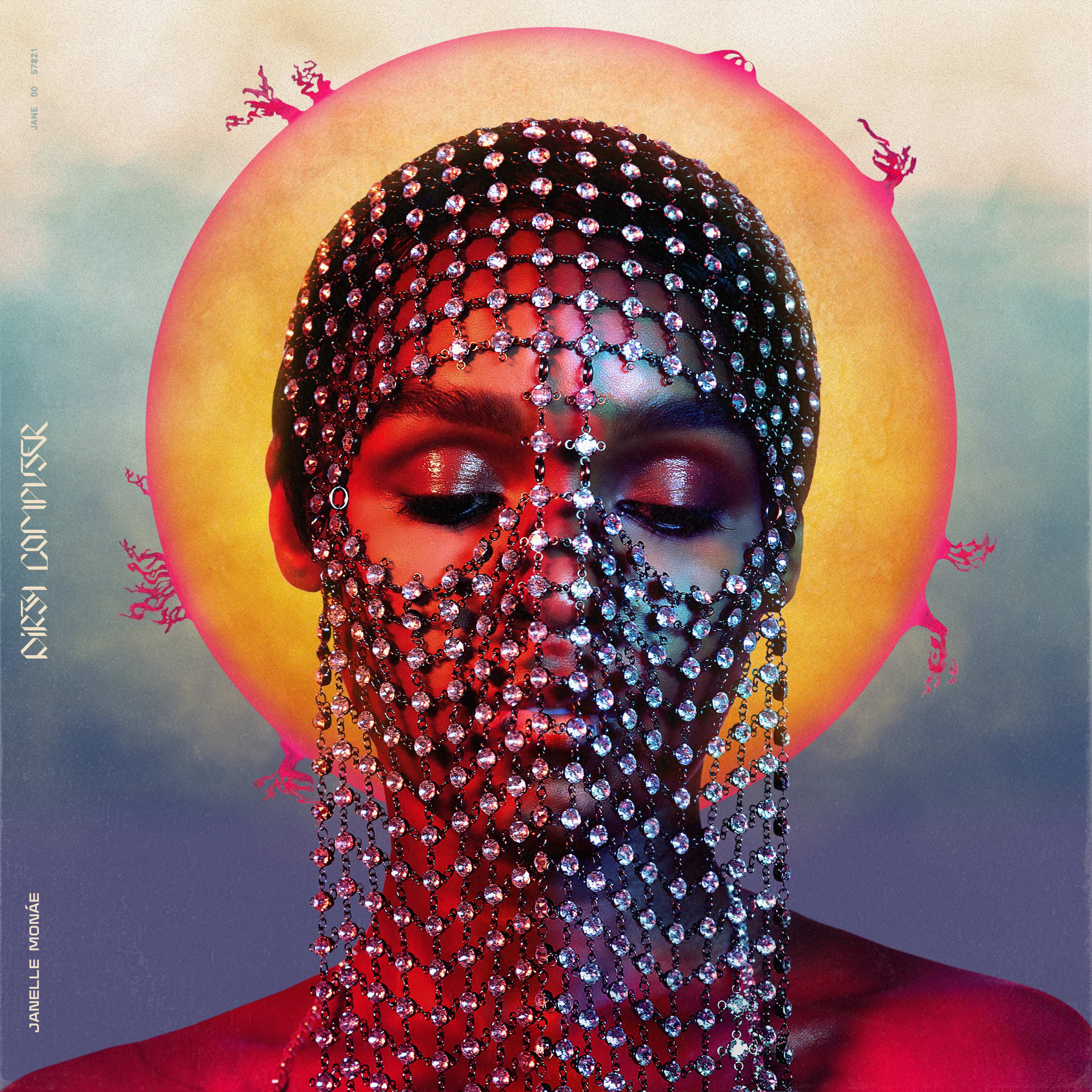 Almost 5 years after delivered her last modern classic The Electric Lady, modern R&B creative genius Janelle Monáe is finally returning with her 3rd full-length album. Things start off with the title track, where she sings about her man picking her up from the ground over some harmonious background vocals. The next song “Crazy, Classic, Life” talks about wanting to live her life over a bouncy atmospheric instrumental while the track “Take a Byte” gets playful over a synth-funk instrumental. After the “Jane’s Dream” skit, we go into the song “Screwed”. Here, Janelle & Zoë Kravitz sing about partying over a spacey yet bouncy beat.  The track “Django Jane” is a full-blown rap song about feminism with a moody beat while the song “Pynk” continues these feminists themes with a fantastic interpolation of the classic Aerosmith song “Pink”.

The track “Make Me Feel” talks about bisexuality over a Prince-like instrumental while the song “I Got the Juice” with Pharrell sees the 2 getting freaky over a bouncy beat from Skateboard P himself. The track “I Like That” is basically Janelle addressing the rumors of her sexuality over a luscious trap beat while the song “Don’t Judge Me” expresses concern of her man only loving her for her disguise over a settle instrumental. After the “Stevie’s Dream” interlude, we then go into the penultimate track “So Afraid”. Here, Janelle expresses her fear of loving this man over an acoustic yet druggy instrumental. The album then finishes off with “Americans”, where Janelle gets conscious over a beat that’ll make you wanna dance.

As a whole, this is yet another damn near perfect album from one of the most creative forces in R&B today. The production is beautiful, it’s well written & it sounds immensely focused as ever before