This is the 5th full-length album from Boston veteran Slaine. Most notable for being a member of the underground supergroup La Coka Nostra, he released an EP & a total of 4 mixtapes before coming through with his debut album A World with No Skies in 2011 under Suburban Noize Records. This was followed up with The Boston Project in 2013 as well as The King of Everything the year after that, but the man went took a 3-year hiatus following the release of the Slaine is Dead EP in 2016 & returned by dropping the mature 1 Day in 2019. Fast forward 15 months later, Slaine is kicking off the 3rd act of his career by dropping The Things We Can’t Forgive.

The opener “When the War Ends”, talks about how we’re not prepared for what happens tomorrow over a despondent beat from The Arcitype, who produced almost every song on the album much like 1 Day. The next song “Everything Once” talks about having a lot in life to lose over a tense piano instrumental while the track “Blurry Eyed” talks about his soul being torn over a portentous beat. The song “Revolver” talks about continuously ending up in the same place that he’s already been in over a cacophonous instrumental while the track “Wrath & Pride” with Snak the Ripper finds the 2 talking about going crazy over an ornery beat.

The song “Chasing Ghosts” opens up about a failed relationship over an instrumental with some melancholic acoustic passages while the track “Beautiful” acknowledges those who call him strange over a fiery beat. The song “Not Enough” calls for strength to get through the day over a pessimistic instrumental while the title track talks about this relationship of his being like a mirror over an optimistic-sounding beat from Statik Selektah. The album ends with “Legend of the Fall”, where Slaine talks about ghosts talking to him in his head over a glum piano instrumental.

This is easily Slaine’s most emotional body of work to date & an equally fantastic follow-up to 1 Day. Once again, the East Coast emcee continues to show maturity through his lyrics & delivery whereas The Arcitype’s dark production goes hand-in-hand with these personal themes. 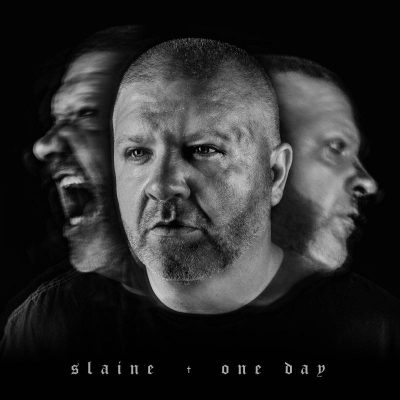 Slaine is a veteran MC from Boston, Massachusetts most known for being a member of La Coka Nostra. He released an EP & a total of 4 mixtapes before coming through with his debut album A World with No Skies in 2011 under Suburban Noize Records. This was followed up with The Boston Project in 2013 as well as The King of Everything the following year but after dropping his Slaine is Dead EP in 2016, the man is making a comeback with his 4th full-length album.

Things kick off with “Redemption”, where Slaine addresses his feeling of atonement over a nocturnal instrumental. The next song “Time is Now” talks about living in the moment over a funky boom bap beat while the track “Still Got My Gun” with the Heavy Metal Kings sees Slaine alongside Vinnie Paz & Ill Bill getting bloodthirsty over a funereal boom bap beat. The track “Trick the Trap” vividly depicts the hard knock life over a grimy Statik Selektah instrumental while the song “It Catches You” is laced with emotional lyricism backed by a grand instrumental.

The track “Broken Toys” with Apathy & Locksmith sees the 3 talking about clout chasers over an woozy instrumental while the song “Night Will Fall” talks about embracing your shadows over a bleak boom bap beat. “The Feeling I Get” then talks about rising above it all over a sinister instrumental whereas “The Day Before I Die” vents about his inner demons over a settler yet grim instrumental. The track “Can’t Stay the Same” talks about maturity over a boom bap beat with some plink synths while the song “One More Day” gets motivational over an impassioned instrumental. Then there’s the closer “Do What You Love”, where Slaine advises the listener to follow their dreams over a boom bap beat with some strings.

Right here is the comeback that Slaine truly deserves, easily his most mature body of work yet in my opinion. He really details everything that’s been going on in his life throughout the past 5 years & what little features are present add a lot to the context of the album. Grown man rap at it’s finest.