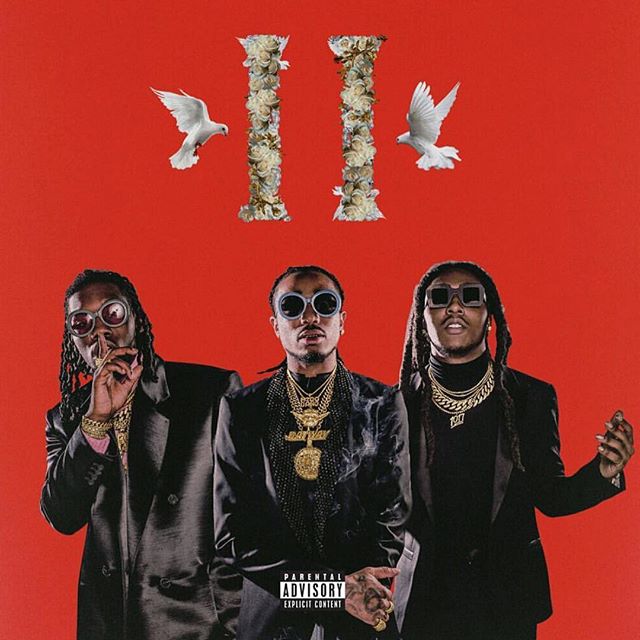 Just the day before the 1 year anniversary of their sophomore album C U L T U R E, Atlanta trap trio Migos is celebrating by putting out the long-awaited sequel album to their last one. The album starts off pretty well with “Higher We Go”, which sees the trio talking about their staying power over a wavy trap beat from Metro Boomin’. The next song The next song “Supastars” talks about their lives now over a futuristic trap beat from Honorable C.N.O.T.E. & while the track “Narcos” does reflect on their drug dealing days, the production is so mediocre. The song “B.B.O. (Bad Bitches Only)” pretty much speaks for itself & the jazzy horns on here were a pretty nice touch.

The track “Auto Pilot (Huncho on the Beat)” brags about the lavish life over a video gamey trap beat from the trio’s standout member Quavo & while the song “Walk It Talk It” with Drake sends a message to all of their haters, the hook is super lazy. The track “Emoji a Chain” talks about being all decked out over a decent Metro Boomin’ beat & while the song “CC” with Gucci Mane is a futuristic sex tune, it deadass sounds like an unreleased Travi$ Scott song down to Quavo’s auto-tuned delivery. The song “Stir Fry” touch down on about their success over an infectious funk/trap fused instrumental from Pharrell & despite “Too Much Jewelry” having a nice verse from Takeoff & the Zaytoven production is pretty atmospheric, it’s not structured all that well. We should’ve gotten verses from Offset & Quavo right after because when Takeoff’s sole verse ends, we’re then lead into the hook alongside a robotic bridge from Quavo that’s hilariously bad & then a short interlude before going back to the hook to end the track.

The song “Gang Gang” is an ode to themselves with a settle trap beat from Murda Beatz while the track “White Sand” with Big Sean & Ty$ talks about the celebrity life over a mediocre video gamey beat from Wheezy. The song “Crown the Kings” talks about how they’re living the dream, but the only distinct characteristics about the instrumental is the faint “ Get Up, Stand Up” sample that’s buried in the mix along with piano that comes in around the second half. The track “Flooded” sounds like a murkier, better structured version of “Too Much Jewelry” & the song “Beast” is pretty much a better version of “CC”.

The Cardo produced “Open It Up” is a sinister-sounding banger about their drug dealing past & despite “Motor Sport” being a pretty decent tune to cruise around to from all 3 members’ flows to the laidback beat from Murda Beatz & Cubeatz, the guest verses from Cardi B & Nicki Minaj ruin it for me. The track “Movin’ Too Fast” talks about their drug dealing lives over a gloomy Quavo instrumental isn’t too bad & the song “Work Hard” talks about their work ethics over a moody beat.

The track “Notice Me” talks about their new lives yet again over a laidback beat & the song “Too Playa” with 2 Chainz is a boastful look into the celebrity lifestyle over a somewhat jazzy trap beat. The song “Made Men” talks about their success over a mellow instrumental & the penultimate track “Top Down on da NAWF” reflects on their younger days in Northside Atlanta over an atmospheric beat. The album then closes with “Culture National Anthem”, which surprisingly gets conscious over a piano-trap beat.

To be quite honest, I’m pretty disappointed in this. There are definitely highlights on here but the final product here is so bloated, that the album becomes an inconsistent listen from start to finish. It’s definitely more listenable than the new Chris Brown album Heartbreak on a Full Moon or even the Control the Streets compilation that Quality Control Music (to which Migos are signed to) dropped last month but if they kept 12 tracks for the album & saved the other 12 in the vault, then I’d enjoy it a lot more than what we really got