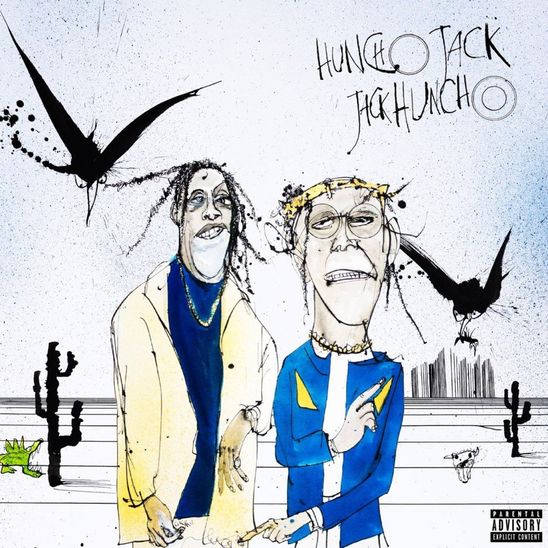 Huncho Jack is a duo consisting of Migos’ standout member Quavo & the KiD CuDi of trap music, Travi$ Scott. Both members have shown quite a bit of chemistry with songs like “Oh My Dis Side”, “pick up the phone” & “Portland”. And alas, here we are with their full-length debut.

The album starts off with “Modern Slavery”, where they’re going back & forth about the lavish life & the Otis Redding sample is surprising yet cool. The next track “Black & Chinese” talks about their favorite types of women over an abrasive Southside beat & the track “Eye 2 Eye” gets with Takeoff gets celebratory over a druggy instrumental from Murda Beatz. The song “Motorcycle Patches” talks about acid & while it would turn me off, it is fun. The track “Huncho Jack” is a prime example of their chemistry over this semi-spacey beat while the song “Saint” flaunts about their success & the bass on here is explosive!

The track “Go” talks about the life of a hustler & the flute sample on here is killer! The song “Dubai Shit” talks about partying in Dubai (obviously) over a druggy beat & I love how Offset is incorporated as he goes back & forth with Quavo during the final verse. The track “St. Laurent Mask” gets into them as dealers & I absolutely love the keys on here. The song “Moon Rock” is an ode to the titular strain of weed & the beat from Vinylz is sinister, yet bass heavy. The track “How U Feel” talks about getting fucked up on lean & the sample on here is absolutely beautiful. The penultimate track “Where U From?” vents about living life in the fast lane & it fantastically samples my favorite Mac DeMarco song: “Chamber of Reflection”. Then album then closes with “Best Man”, where they both get appreciative of their success over another spacey beat.

Personally, this was WELL worth the wait. The production slaps & the chemistry between Quavo & Travi$ is stronger than before