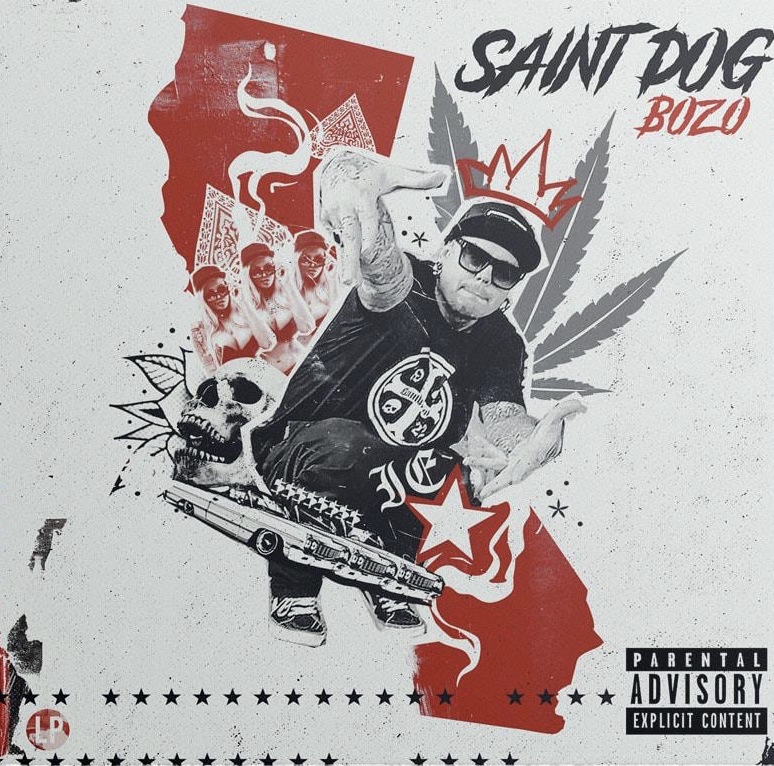 Saint Dog is a 43 year old rapper from Chisholm, Minnesota that came up as a member of the trio P.T.B. with D-Loc & Johnny Richter, all 3 of whom would later form the Kottonmouth Kings with Daddy X in 1996. He would eventually leave KMK in 1999, but would remain on Suburban Noize Records & make his solo debut 5 years later with Ghetto Guide. This would be followed up in 2006 with U.S.A. (Unconformable Social Amputees) but after rejoining Kottonmouth recently, he’s coming back with his 3rd full-length album.

The album kicks off with “Sounds of the Underground”, where Saint Dog talks about the things people say about him over a instrumental that’s perfect for the clubs. The title track sings about the things he sees in this person over a laidback instrumental while the song “I’m Living Life (Right Now)” with Danny Diablo & Syniister sees the 3 talking down to their competition over an instrumental that sounds like something Dr. Dre & Scott Storch would’ve made together in the 2000s.

The track ”West Side” with Kung Fu Vampire & Mars of course details the gritty life in California over an eerie beat while the song “Bar Door Sign” with The DRP & Prolifik is of course an alcohol banger with a thumping beat. The track “Same Ol’ Screaming” charismatically brags over an electronic beat with some live drumming while the song “She Be Wifey” talks about how fine this woman is over a trap beat with some plinky keys.

The track “Pixie Girl” is a stripper anthem with an unexpected EDM influenced beat from UnderRated while the song “Gangsta Ways” needs no further explanation over an acoustic instrumental. The track “Bang Bang” with Skribbal sees the 2 getting vicious over an instrumental with a prominent piano & some g-funk synthesizers that pop up during the hook while the song “Already Dude” gets reflective over another instrumental that kinda has a Dr. Dre/Scott Storch influence to it.

The track “Love (Is What I Got)” is a clumsily delivered romance tune with some great acoustic guitar passages while the song “Lay Low” with Big Hoss & Jaysin Logik sends a warning to those who oppose them over some keyboards. The penultimate track “Where I Stay” with Lil Jerry is a dedication to California with a summery beat & then the album ends with “Stir It Up”, which is a killer rap rock cut.

Overall, this was a pretty solid comeback. The production is decent as were most of the features, but Saint Dog sounds very focused & passionate to be back on the mic.